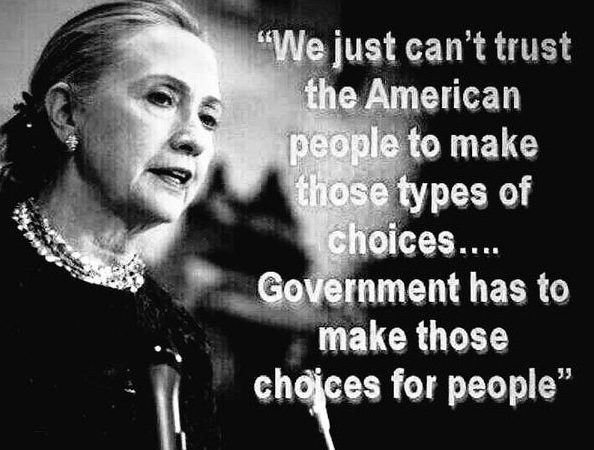 “Who is Juanita Broaddrick? I’ve never heard of her!” cried Betty Friedan, the founder of modern feminism. Friedan’s outburst came at last Friday’s conference, entitled “The Legacy and Future of Hillary Rodham Clinton.” Held at the American Enterprise Institute in Washington. D.C., the event offered a chilling microcosm of an angry, divided America.

For nearly an hour, a five-woman panel had been debating whether Hillary qualified as a “feminist heroine.” I thought Broaddrick’s claim of having been raped by Hillary’s husband had some bearing on this point, so I broached the subject during the question-and-answer period. Friedan’s dyspeptic denial followed.

Was Friedan telling the truth? Maybe. And maybe all those millions of Germans who professed ignorance of the death camps were telling the truth too. The problem is, having admitted her ignorance, Friedan showed no interest in exploring the matter further. And that was the problem with the Germans too.

Totalitarian impulses flourished at the conference. Taking a page from Soviet psychiatry, some Clintonites suggested that Hillary hating might be a mental illness.

David Brock, author of The Seduction of Hillary Clinton, opined that “Clinton hating” was “a realm for psychology, frankly… A lot of the venom is projection.” Eleanor Clift was even blunter. When confronted by hostile questioners, the Newsweek pundit snapped, “You all belong in a support meeting for the anti-Hillary frustrated minority!”

These cracks drew a few laughs. But the anti-Hillary panelists reminded us that more serious issues were afoot. Left-wing journalist Christopher Hitchens, author of No One Left to Lie To, warned that the Clintons were presiding over “the transformation of the American democracy, the American republic, into a banana republic.” He pointed to the strange timidity of the press as one symptom. “It is amazing that the New York press should congratulate itself on being so fierce and unappeasable and brave and searching when it has so far not asked [Mrs. Clinton] one single tough question.”

Hitchens was dead on. But even he didn’t know the half of it. During the question period, I asked him whether he knew that Hillary’s Secret Service bodyguards had physically assaulted journalists in New York trying to interview the First Lady at the Saint Patrick’s Day parade. NewsMax.com had reported the story, but the mainstream press had ignored it (“White House, Secret Service Stonewalling on Assault by Hillary’s Bodyguards”).

“You’ve just told me something I didn’t know and hadn’t seen reported,” Hitchens admitted. “I will check it out.”

Marie Cocco of Newsday found me in the crowd afterwards and grilled me about the parade incident. She hadn’t heard of it either. “It seems somewhat unlikely,” she said. Nevertheless, Coco assured me that she was “curious about delving into the facts.” Readers are encouraged to watch Newsday for the results of her investigation. But don’t hold your breath.

When Chicago police beat up journalists outside the 1968 Democratic Convention, Walter Cronkite exposed it on national television. The resulting scandal helped bring down the Democratic Party. You won’t see that happening today. The new breed of journalist knows his place.And that place is right under Hillary’s boot.

How did this woman acquire such power? During his speech, David Horowitz explained that it’s all part of the plan. Leftwing operatives have been infiltrating government, media and academia for decades. Now a powerful network is in place to promote the agenda of “America’s foremost leftist,” as Horowitz calls the First Lady.

Horowitz – whose Center for the Study of Popular Culture co-sponsored the event – was reared by Communist parents and spent the first half of his life working to overthrow democracy in America. He saw from the inside how Marxist revolutionaries will adopt any disguise – civil rights worker, feminist, peace activist, environmentalist – as a cover for their real work of building socialism.

Take Betty Friedan. Her legend paints her as an ordinary housewife who turned feminist after realizing that she was bored with married life. “In reality,” says Horowitz, “Friedan spent 25 years as a professional journalist in the Communist left” before writing The Feminine Mystique in 1963. “She was a Stalinist at Smith College. She was never a housewife. Her whole life is a lie.”

A true feminist would champion Juanita Broaddrick. But Friedan’s feminism takes second place to her Marxism, says Horowitz. As a soldier of the revolution, her real goal is to gain power. Bill and Hillary can give her power. Juanita Broaddrick cannot.

Hillary Clinton is another revolutionary in disguise, says Horowitz. She poses as a moderate New Democrat. But her totalitarian goals are similar to Friedan’s. “She will do anything to get the power,” says Horowitz. “She will sound like a conservative, if she has to.” But Hillary’s policy proposals reveal her true agenda.

Take her 1994 health plan (which we have not seen the last of). Our current HMOs are bad enough. But if an HMO refuses treatment, you at least have the option of hiring a doctor at your own expense. Hillary wanted to close this loophole. Under her proposal, doctors who treated patients outside the plan would have been arrested and jailed.

Hillary’s education plans are no less draconian. In 1992, she proposed creating a government bureaucracy with the power to steer students into specific career tracks, then place them in corporate jobs after graduation. “I see it as a plan for a kind of corporate fascism,” commented panelist Joyce Milton, author of The First Partner. “What you’re doing is giving the government the power to decide who works and who doesn’t.”

Milton calls it fascism. Horowitz calls it communism. But the end result is the same. Instead of making our own decisions, the government will make them for us.

Just where is Hillary going with all this? According to CBS anchorman Dan Rather, she may be headed straight for the Oval Office.

“I would not be astonished to see Hillary Clinton be the Democratic nominee [for president] in 2000,” said Rather on “Larry King Live,” December 3, 1998. ”Listen, I agree that Al Gore is the odds-on favorite… But… you can make a case that Hillary Clinton might, might – mark the word – be the strongest candidate for the Democrats.”

Hillary for president? It seems far-fetched. Yet, eight months after Rather made this statement, NewsMax.com’s Carl Limbacher Jr. discovered that Hillary was registered with the Federal Election Commission not only as a senatorial candidate but also as a presidential one for the year 2000 (“Federal Election Commission Lists Hillary as Presidential Candidate,”). At the very least, Hillary seems to be keeping her options open.

All appearances suggest that Hillary has given up on running for President this year. But her Senate race may well be a calculated step toward a presidential bid in 2004. Eight more years in the White House would give Hillary a chance to finish what she started in 1992. America would complete its descent into the “banana republic” that Hitchens fears.

“Do you ever play this game, which of your friends would turn you in, if it was a military dictatorship?” asked Hitchens at the conference. “Socialists play it regularly. And you almost never guess wrong.”

At the conference last Friday, I met several people who I am sure would turn me in at the drop of a hat. But I met others who would probably not. A surprising number of the latter hailed from the left.

Hillary paints her enemies as a “vast right-wing conspiracy.” But many of the Clintons’ sternest critics are leftists such as Hitchens, Alexander Cockburn and Nat Hentoff. I salute them. They have grasped a moral truth that still eludes many Americans: Left and right mean nothing to a dictator. In a police state, there are only cowards and heroes.”

2000, Horowitz Hillary Clinton is another revolutionary in disguise she will do anything to get the power, Newsmax April 12, The Hillary Conspiracy, The Seduction of Hillary Clinton, The transformation of the American democracy the American republic into a banana republic Uncategorized No Comments »

« Koch: I Hope They Prosecute Clinton, What he did with the commutations and the pardons is so shocking, Newsmax March 3, 2001, Pardongate criminal probe by US Attorney for New York’s southern district Mary Jo White (Previous News)
(Next News) Hillary’s Reign of Terror, Her enemies have been harassed investigated audited and blacklisted, Hillary’s 1993 purge of the White House Travel Office goal was to free up jobs for political cronies, Newsmax February 28, 2000 »