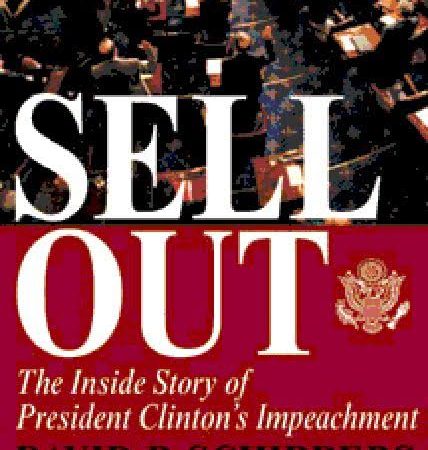 Official Washington is buzzing behind the scenes this week, not about the conventions in Philadelphia and Los Angeles but about the man who led the Clinton impeachment investigation and what he may reveal in his soon-to-be-released book, “Sellout: Why Bill Clinton’s Impeachment Was Over Before It Began.”

After seven scandal-scarred years of the Clinton administration, Republicans have made restoring honor and integrity to the presidency a key issue in this year’s election. But the bombshells about to be dropped by one-time Chicago mob buster David Schippers may explode in a number of unpredictable ways.

Schippers, House Judiciary Chairman Henry Hyde’s personal pick to head the impeachment probe, promises to name names, including those of Republicans who killed his investigation in the crib and allowed Clinton to slip the noose on a whole host of allegations that have yet to be fully explained to the country.

But before he planned to pen his impeachment tell-all, Schippers talked to NewsMax.com. It was just six weeks after the Senate had decided to acquit Bill Clinton, and Schippers was fuming over the fact that not a single U.S. Senator had reviewed the secret impeachment evidence against Clinton stored in D.C.’s Gerald Ford Building.

In the exclusive interview, Schippers described some of those secrets – which had been kept from the nation during the trial of its president. Now, on the eve of the publication of his blockbuster book, NewsMax.com revisits Schippers’ revelations, as they first appeared in a report published on March 21, 1999:

The House impeachment investigation into President Clinton’s alleged crimes was deliberately curtailed by congressional leaders who refused to consider key evidence beyond that which was already on the public record about the Monica Lewinsky scandal.

That’s the stunning charge from the man who built the case against Clinton, former House Majority Counsel David Schippers.

In an exclusive interview with NewsMax.com, Schippers described his frustration and some never before reported impeachment evidence.

“Let me tell you, if we had a chance to put on a case, I would have put live witnesses before the committee. But the House leadership, and I’m not talking about Henry Hyde, they just killed us as far as time was concerned. I begged them to let me take it into this year.”

Schippers added, “Then I screamed for witnesses before the Senate. But there was nothing anybody could do to get those Senators to show any courage. They told us essentially, you’re not going to get 67 votes so why are you wasting our time.”

The censored evidence was stored under seal in D.C.’s Gerald Ford Building and was crucial in persuading up to 40 House members to vote for impeachment. Much of the most compelling material had to do with women other than Lewinsky, like Juanita Broaddrick and Kathleen Willey.

A week before the House vote Schippers says he invited members of Congress to examine the secret documents. He denied previous reports that he personally made an impassioned argument that carried the day. “It was the material itself, not anything I said, that changed people’s minds,” said Schippers, adding that he made himself and his staff available to answer questions on request.

The House Majority Counsel opened the files to Democrats and Republicans alike. “We had 8, 10, 12 people in the room at a time,” said Schippers, who said that some House Democrats did access the secret files. But when asked if any senators of either party took the trouble to examine the material, the veteran prosecutor said in disgust, “No, not a single one.”

Juanita Broaddrick’s rape allegation was at once the most explosive and yet problematic charge Schippers had to deal with. She acknowledged her Clinton assault under oath for the first time to Independent Counsel Ken Starr’s FBI investigators on April 8, 1998. But reports in the New York Daily News and the Washington Post said Broaddrick’s FBI account had been “inconclusive,” implying that Starr had failed to pursue her allegation because she was less than convincing.

“That business of Broaddrick being deemed inconclusive is not true. What actually happened is, I think, Starr decided not to follow up because once Lewinsky cooperated, they figured they had their impeachable offense and decided to concentrate on that.”

But Schippers did follow up, sending former Chicago police detective Diana Woznicki, then on loan to Judiciary Committee staff, to Van Buren, Ark., to interview Broaddrick. Woznicki had some rape counseling experience and, Schippers said, the two women “hit it off.”

Broaddrick gave Woznicki a detailed account of what she says Clinton did to her, describing the lip-biting he inflicted as forceful enough to break the skin. But Schippers disputed the account of one Broaddrick witness, Phillip Yoakum, who had told Paula Jones’ investigators that Broaddrick’s lip had nearly been torn in two. “It was severe but it wasn’t torn off,” Schippers said.

After NBC aired 23 minutes from the five hours of videotape they had of Broaddrick’s gripping account, rumors swirled about a second rape during Clinton’s alleged April 25, 1978, attack. John McLaughlin, John Hockenberry and Chris Matthews, all NBC personnel in a position to know what the network left on the cutting room floor, made on-air references to the additional assault.

When questioned about those reports, Schippers cryptically told NewsMax.com, “I can’t go into detail but they’ve got some pretty damn good sources.”

The self-described “old prosecutor” explained that he never considered making the rape allegation by itself part of the impeachment evidence. Instead, what might have brought Broaddrick into the case was any evidence of a White House attempt to silence her.

However, Broaddrick never claimed to Woznicki, or anybody else, that she’d been pressured to lie when she filed a false affidavit with Paula Jones’ attorneys denying that Clinton made “unwelcome advances” on her. Though key Clinton damage controller Bruce Lindsey had advised Broaddrick’s lawyer Bill Walters on how to prepare the document, it was Walters, not Lindsey, who initiated the contact.

“I had no intent to introduce Broaddrick into the case unless something else had developed,” the prosecutor said. Had he been allowed to call other women who had alleged intimidation, such as Gennifer Flowers, Sally Perdue and Kathleen Willey, Schippers said he would have considered including the alleged rape victim.

“I think there’s a pattern of intimidation and I think it comes out of Lindsey’s law firm,” said Schippers. “But I wasn’t going to put Juanita Broaddrick on the stand alone. It would have been shabby, I think, to put her on just on the basis of the false affidavit. And the shabbiness of it all would have far outweighed any possible effect it would have had.”

Ironically, at the height of the impeachment trial in mid-January, something did develop that might have moved Broaddrick to the front burner had it happened weeks earlier.

Schippers explained the event he learned of too late to include:

“There was a time when she was being followed. This was just around the time of the [NBC] interview. She was being followed by a guy who was making it very obvious. That’s how they do it. They get right out there and look at you in order to scare the hell out of you.”

The mysterious tail put on Broaddrick is eerily similar to what several witnesses claim happened to them as they were about to testify before Starr grand juries.

Patrick Knowlton, who happened by Fort Marcy Park the day White House counsel Vince Foster’s body was discovered there, had told the London Telegraph’s Ambrose Evans-Pritchard and NewsMax.com’s Christopher Ruddy that he was followed by a series of men on the streets of D.C. soon after he was subpoenaed for Starr’s Foster investigation. Knowlton’s account, documented in the appendix to Starr’s Foster report, clearly shows that Foster could not have taken his life in the Virginia park.

Skeptical at first, Ruddy took a walk with Knowlton after the witness reported the harassment. Just as Knowlton claimed, a series of individuals followed and glared at the pair in what Ruddy later reported for the Pittsburgh Tribune-Review was a very unnerving attempt to send Knowlton the clear message: Truthful testimony about Vince Foster could be hazardous to one’s health.

Though Starr and the media ignored Knowlton’s harassment, prosecutor Schippers told NewsMax.com that he took the account of another Starr witness extremely seriously:

“I wanted to put Kathleen Willey on. Because, you talk about intimidation – they did everything but threaten to kill her. And in fact, they did give her a threat to kill, in a veiled fashion, two days before her deposition.”

Schippers recounted Willey’s story about the jogger who approached her, asked about her missing cat, the recent vandalism of her car and then mentioned her children by name. “Don’t you get the message?” the total stranger told the frightened witness.

But the former Chicago prosecutor shared a chilling new aspect of Willey’s ordeal – an account that could have been lifted right from the script of an Alfred Hitchcock film:

“The woman was absolutely scared to death. She got a call from the electric company. And they told her they were going to shut off her power and she’d be in total darkness for about 15 minutes. At first she thought nothing of this. But when it didn’t happen she called them back to ask when they were going to do this. And they said, ‘What are you talking about?’ So that’s the kind of thing that happened to some of these witnesses. That’s how they operate.”

Had these ominous accounts from Broaddrick and Willey been introduced into evidence, along with charges of suspected Clinton-connected intimidation of Elizabeth Ward-Gracen, Gennifer Flowers, Sally Perdue, Dolly Kyle Browning and others – would it have made a difference?

David Schippers remains skeptical, since he now doubts the Senate would have convicted Clinton under any circumstances. Still, congressional timidity ensured that the American people were kept in the dark about the totality of the evidence against their president.

And now, six weeks after Clinton’s acquittal, we can only guess how the press and the public might have reacted to an impeachment case built on compelling charges of mob-style thuggery, rather than lies and obstruction about consensual sex.”