Berg says it is “no surprise”
that Obama wants the Mosque near Ground Zero
as Obama is a Muslim !

Obama/Soetoro has Catered to
Muslims since he became President

Berg said, “It is ‘no surprise’ that Obama/Soetoro has endorsed the fact that a Mosque should be built near ‘Ground Zero’ as Obama is a Muslim !  The school records from Indonesia that can be seen on our website obamacrimes.com indicate that Obama was adopted/acknowledged by his step-father, Lolo Soetoro, and Obama’s ‘legal’ name became ‘Barry Soetoro’; his nationality became ‘Indonesia’; and his religion was ‘Islam’ = ‘Muslim’.”

Berg continued, “Since Obama/Soetoro became President, he has catered to the Muslim community; he has travelled around the world ‘apologizing’ for the United States; he bowed down to the Saudi King, the Japanese Emperor and the leader of China.”

Berg remarked, “One of my supporters sent me the following email – ‘Let me be very clear, they can build the Mosque at Ground Zero when they give us a permit to build a church in Mecca!’ and it really speaks to the overall issue.  There are two [2] separate issues: 1) the rights guaranteed to us under the 1st Amendment to ‘our’ U.S. Constitution, that includes ‘freedom of religion’; and 2) on the other hand, where to build a certain Mosque.  There is no question as to the freedom of religion, but where to build involves ‘sensitivity’ to the people in the area where one wants to build.  The Muslims that plan to build the Mosque do not care about the ‘feelings’ of others; they just turned down the proposal from New York Governor David Paterson to meet with them and he would find State property for them to build their Mosque in another location in Manhattan.”

Berg continued, “I have received several emails with suggestions to place pig heads, pig blood and even whole pigs on the land set aside to build the Mosque near ground zero in New York.  The reason for this suggestion is due to the Muslim Religion not allowing touching anything a pig has touched.  I do not agree with the building of the Mosque near ground zero; however, interfering with a Religion is considered ‘Hate’ crimes and is very serious.  ‘Hate’ crimes, which I do not believe in nor will I endorse, carry severe penalties, they are felonies and can be prosecuted State or Federally.  One cannot attempt to just hold up one part of the U.S. Constitution and not the other parts.  The First Amendment of the United States Constitution guarantees all ‘Freedom of Religion.’  Again, we do not agree with the building of a Mosque at ground zero; however, there are legal ways to oppose the building of this particular Mosque, without breaking our State and Federal Laws.”
Berg commented further regarding Obama by saying, “I believe Obama probably prays to his Muslim religion with others that he invites into the White House, and that is his right and privilege.  Obama’s twenty [20] years with Reverend Jeremiah Wright, Jr. of the Trinity United Church of Christ in Chicago was questionable as to the sermons given and what Obama took from them.  It is unbelievable that Obama did not know the Reverend Wright as others did.  Also, according to sources, the Trinity United Church had many members who were and are Muslims.”

Berg continued, “The pressure is building to force Obama/Soetoro to admit that he is an Imposter, a Fraud, a Phony and his tale is the largest ‘Hoax’ in the history of the United States, over 234 years.  Actually, the pressure is building because the overwhelming evidence is that Obama/Soetoro was born in Africa and more important is the fact that Obama was adopted/acknowledged by his step-father, Lolo Soetoro, in Indonesia and Obama’s ‘legal’ name became ‘Barry Soetoro’ and there is no evidence that he has legally changed his name and therefore, every time he uses the name of ‘Barack Hussein Obama’ he has and is committing fraud.”

Berg concluded, “I am in the final days of planning for the largest March/Rally in Washington, DC in October 2010 to force Obama/Soetoro to step down from the Office of President, a position he is not Constitutionally eligible to be President as he is an ‘Usurper’ and he has led our country into a Constitutional crisis.  When Obama/Soetoro steps down, all of the laws, appointments and programs including ObamaCare will end because all of them are ‘voidable’”.

For copies of all Press Releases and Court Pleadings, go to:
http://obamacrimes.com 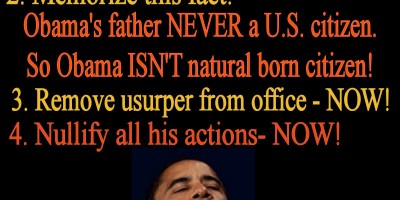 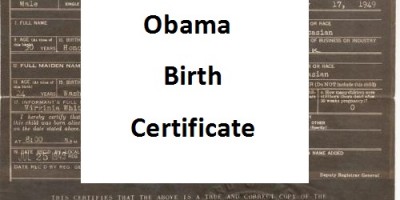