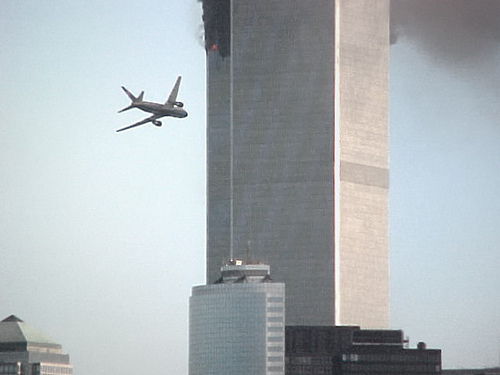 The following article can no longer be found on the internet at its original source.  A copy from the Wayback Machine is used.

March 15, 2004 — SEN. John Kerry boasts how he “sounded the alarm on terrorism years before 9/ 11,” referring to his 1997 book “The New War.” Too bad he didn’t blast it when it really counted – four months before the hijackings, when he was hand-delivered evidence of serious security breaches at Logan International Airport, with specific warnings that terrorists could exploit them.

Former FAA security officials say the Massachusetts senator had the power to prevent at least the Boston hijackings and save the World Trade Center and thousands of lives, yet he failed to take effective action after they gave him a prophetic warning that his state’s main airport was vulnerable to multiple hijackings.

“He just did the Pontius Pilate thing and passed the buck” on back through the federal bureaucracy, said Brian Sullivan, a retired FAA special agent from the Boston area who in May 2001 personally warned Kerry that Logan was ripe for a “jihad” suicide operation possibly involving “a coordinated attack.”

Rewind to May 6, 2001. That night, a Boston TV station (Fox-25) aired reporter Deborah Sherman’s story on an undercover investigation at Logan that Sullivan and another retired agent helped set up. In nine of 10 tries, a crew got knives and other weapons through security checkpoints – including the very ones the 9/11 hijackers would later exploit.

The next day, Sullivan fired off a two-page letter to Kerry highlighting the systemic failures.

“With the concept of jihad, do you think it would be difficult for a determined terrorist to get on a plane and destroy himself and all other passengers?” he warned. “Think what the result would be of a coordinated attack which took down several domestic flights on the same day. With our current screening, this is more than possible. It is almost likely.” The toll from such an attack would be economic, as well as human, he predicted with chilling accuracy.

Sullivan followed up by having the undercover videotape hand-delivered to Kerry’s office.

More than 11 weeks later, Kerry finally replied to his well-informed and anxious constituent. “I have forwarded your tape to the Department of Transportation’s Office of Inspector General [DOT OIG],” he said in a brief July 24, 2001, letter, a copy of which I’ve obtained.

Yet Sullivan had made it clear in his letter that going to his old agency was a dead end. He and other agents had complained about security lapses for years and got nowhere. “The DOT OIG has become an ineffective overseer of the FAA,” he told Kerry. Sullivan suggested he show the tape to peers on committees with FAA oversight. He even volunteered to testify before them.

But he never heard from Kerry again.

At that point, Steve Elson, the other agent who’d teamed up on the TV sting, decided to take a crack at the junior senator.

A fiery ex-Navy Seal, Elson spent three years as part of an elite FAA unit called the Red Team, which did covert testing of airport security across the country, before retiring as a field agent in Houston. He offered to fly to Washington at his own expense to give Kerry a document-backed presentation about the “facade of security” at Logan and other major airports.

But a Kerry aide said not to bother. “You’re not a constituent,” Elson was told just a few weeks before the hijackings. He went ballistic, warning that if Kerry didn’t act soon he’d risk the lives of planeloads of his actual constituents. That warning now looks like prophecy: At least 82 Kerry constituents were murdered aboard American Airlines Flight 11 and United Airlines Flight 175.

“Enhanced security would have prevented the hijackings, virtually without question,” Elson now insists. If nothing else, it might have discouraged ringleader Mohamed Atta, who monitored security procedures at Logan weeks before the hijackings.

Yet the warnings apparently did stick in Kerry’s mind: In the days after 9/11, Kerry told the Boston Globe that he’d triggered an undercover probe of Logan security by the General Accounting Office in June 2001.

But he wrote Sullivan no such thing in his July letter, stating only that he passed his warning and tape on to Transportation, not GAO. And GAO, though it is the investigative arm of Congress, didn’t seem to know what the senator was talking about. The agency had tested security at two airports before 9/11, but neither one was Logan. And Kerry confessed he didn’t know the outcome of the probe he says he triggered.

Sullivan and Elson, joined by aviation-security experts David Forbes and Andrew Thomas, want to see Kerry hauled before the 9/11 Commission to answer questions about what he knew about Logan’s lapses, and specifically what he did about them, before that fateful day. It’s a reasonable request – especially since Kerry has complained that President Bush will only give the panel an hour of his time.

Where was Kerry’s sense of urgency? Where was his leadership? These are fair questions to ask of someone vying for Bush’s job.

“We don’t have to wait for a tragedy to occur to act,” Sullivan urged Kerry in his letter. But tragically, that’s exactly what happened – at both ends of Pennsylvania Avenue, and on both sides of the aisle.

Paul Sperry is a Washington investigative reporter and author of “Crude Politics.”