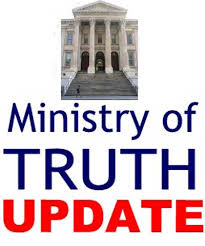 “Why does Janet Yellen keep misrepresenting the jobs situation and quoting the big lie of the unemployment rate?”…Citizen Wells

“We have seen continued progress toward our objective of maximum employment. The pace of employment growth has remained strong, with job gains averaging nearly 290,000 per month over the past three months. The unemployment rate was 5.5 percent in February; that’s three-tenths lower than the latest reading available at the time of our December meeting. Broader measures of job market conditions—such as those counting individuals who want and are available to work but have not actively searched recently and people who are working part time but would rather work full time—have shown similar improvement. As we noted in our statement, slack in the labor market continues to diminish. Meanwhile, the labor force participation rate—the percentage of working-age Americans either working or seeking work—is lower than most estimates of its trend and wage growth remains sluggish, suggesting that some cyclical weakness persists. So considerable progress clearly has been achieved, but room for further improvement in the labor market continues.

We continue to expect sufficient underlying strength in economic growth to support ongoing improvement in the labor market. After averaging about 2-1/2 percent over 2014, growth of real gross domestic product appears to have slowed in the first quarter of this year, in part reflecting a moderation in household spending. In addition, the recovery in the housing sector remains subdued and export growth looks to have weakened. Looking ahead, however, the Committee continues to expect a moderate pace of GDP growth, with robust job gains and lower energy prices supporting household spending.”

There is only one explanation for Janet Yellen’s irresponsible statements about the employment situation in the US.

She is either on drugs or being scripted by the Obama camp.

She can’t be that stupid.

She keeps quoting the unemployment rate, in fact I just heard her refer to it.

Jim Clifton, the CEO of Gallup calls it a lie!

And her touting the recent job gains.

It also reported that there were only 96,000 more employments and in fact 43,000 fewer white employments.

Zero Hedge and Citizen Wells are questioning these Orwellian claims.

Wall Street and main street had better be worried about the real state of the economy and the jobs crisis in this country.

“Falling wages aside (a critical topic as it singlehandedly refutes the Fed’s bedrock thesis of no slack in a labor force in which there are 93 million Americans who no longer participate in the job market) going back to the original topic of which economic factors are prompting the Fed to assume there is an economic recovery, without exaggeration, all alone.

Is there nothing else that can validate the Fed’s rate hike hypothesis? Well… no.

Below is a selection of the economic data points that have missed expectations in just the past month.

So a pattern emerges: we have an economy in which jobs and only jobs are acting as if there is a strong recovery, while everything else is sliding, disappointing economists, and in fact hinting at another contraction (whatever you do, don’t look at the Fed’s internal model of Q1 GDP).

To be sure, economists these days are better known as weathermen, and so they are quick to blame every economic disappointment on the weather. Because, you see, they were unaware it was snowing outside when they provided their forecasts about the future, a future which should be impacted by the snowfall that day, and which they promptly scapegoat as the reason for their cluelessness. Yet one wonders: why didn’t the harsh snow (in the winter) pound February jobs as well? Recall last year’s payroll disappointments were immediately blamed on the weather which was just as “harsh” as this year. Why the difference?

And yet, today this rising “anomaly” between Nonfarm Payolls “data” and everything else, hit a crescendo, and some – such as Jim Bianco – have had it with the lies anomalies, which prompted him to ask the following:

Why Are Construction Jobs and Housing Starts Telling Different Stories? Is The Problem Non-Farm Payrolls

Since it is PI Day and Einstein’s birthday, I present some new data and a math lesson. Math that I understood by the fifth grade.

Below are the changes in employment by race during the first 6 years of the Obama Administration.

The ratio of employment added in 6 years over employment in Jan. 2009 is given with the resulting percent change over 6 years.

Seen/heard them reported by the White House or mainstream media, Fox?

Our math capabilities have diminished in this country.

But our real problems are priorities and integrity.”