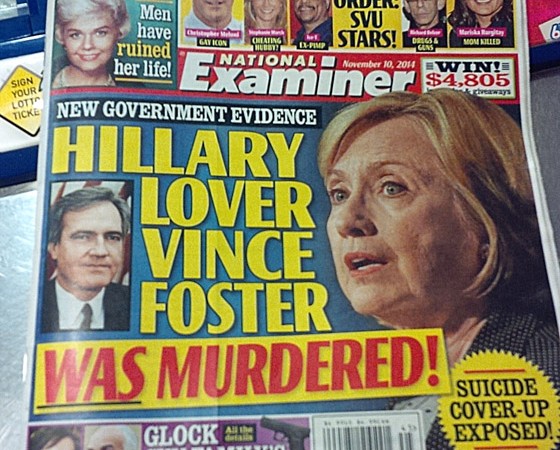 Americans of all political persuasions are coming to the sad realization that our First Lady — a woman of undoubted talents who was a role model for many in her generation — is a congenital liar.

Drip by drip, like Whitewater torture, the case is being made that she is compelled to mislead, and to ensnare her subordinates and friends in a web of deceit.

1. Remember the story she told about studying The Wall Street Journal to explain her 10,000 percent profit in 1979 commodity trading? We now know that was a lie told to turn aside accusations that as the Governor’s wife she profited corruptly, her account being run by a lawyer for state poultry interests through a disreputable broker.

She lied for good reason: To admit otherwise would be to confess taking, and paying taxes on, what some think amounted to a $100,000 bribe.

2. The abuse of Presidential power known as Travelgate elicited another series of lies. She induced a White House lawyer to assert flatly to investigators that Mrs. Clinton did not order the firing of White House travel aides, who were then harassed by the F.B.I. and Justice Department to justify patronage replacement by Mrs. Clinton’s cronies.

Now we know, from a memo long concealed from investigators, that there would be “hell to pay” if the furious First Lady’s desires were scorned. The career of the lawyer who transmitted Hillary’s lie to authorities is now in jeopardy. Again, she lied with good reason: to avoid being identified as a vindictive political power player who used the F.B.I. to ruin the lives of people standing in the way of juicy patronage.

3. In the aftermath of the apparent suicide of her former partner and closest confidant, White House Deputy Counsel Vincent Foster, she ordered the overturn of an agreement to allow the Justice Department to examine the files in the dead man’s office. Her closest friends and aides, under oath, have been blatantly disremembering this likely obstruction of justice, and may have to pay for supporting Hillary’s lie with jail terms.

Again, the lying was not irrational. Investigators believe that damning records from the Rose Law Firm, wrongfully kept in Vincent Foster’s White House office, were spirited out in the dead of night and hidden from the law for two years — in Hillary’s closet, in Web Hubbell’s basement before his felony conviction, in the President’s secretary’s personal files — before some were forced out last week.

Why the White House concealment? For good reason: The records show Hillary Clinton was lying when she denied actively representing a criminal enterprise known as the Madison S.& L., and indicate she may have conspired with Web Hubbell’s father-in-law to make a sham land deal that cost taxpayers $3 million.

Why the belated release of some of the incriminating evidence? Not because it mysteriously turned up in offices previously searched. Certainly not because Hillary Clinton and her new hang-tough White House counsel want to respond fully to lawful subpoenas.”