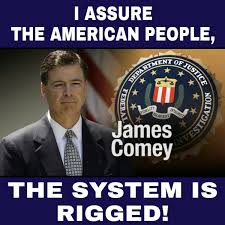 “Has Jim Comey Disgraced the FBI?

The very last thing we need in the United States is the perception that law enforcement is crooked and is pulling punches based on whether a target is politically connected and wealthy. Welcome to Jim Comey’s FBI. It is perceived to be crooked.

But the review does not really matter. As I pointed out in yesterday’s post (Hillary Clinton’s Unlawful Conduct)  on the latest batch of State Department emails there is irrefutable evidence that Hillary sent classified material over her unclassified server and sent it directly to her daughter, but used a pseudonym. That establishes beyond a reasonable doubt that Hillary knew what she was doing. It was a purposeful act.

Then we have today’s news courtesy of the NY Post that Hillary’s maid was handling classified info:

As secretary of state, Hillary Clinton routinely asked her maid to print out sensitive government e-mails and documents — including ones containing classified information — from her house in Washington, DC, e-mails and FBI memos show. But the housekeeper lacked the security clearance to handle such material.

In fact, Marina Santos was called on so frequently to receive e-mails that she may hold the secrets to E-mailgate — if only the FBI and Congress would subpoena her and the equipment she used.

This new information further destroys Hillary’s claim that she did not act with knowledge or intent. The hell she did!!

Here’s the problem with Comey–what he did in July, what he did a week ago and what he did today–he is not the prosecutor. It is not his job to make the final decision whether or not someone broke the law. He has crossed a line into the political world. Hillary’s culpability here is quite clear. Classified emails are not mistakenly or inadvertently put onto an unclassified server. They are only put there by intent. Comey’s insistence that there is not a chargeable offense here is beyond laughable. It is absurd and betrays the concept of equal justice under the law.

We now know that we live in an America of selective justice and political enforcement. God help you if you are on the wrong side.

On this point Donald Trump is right–the system is rigged in favor of the wealthy and the powerful.”

"He has crossed a line into the political world.", "Jim Comey’s FBI. It is perceived to be crooked.", 2016, Has Jim Comey Disgraced the FBI?, November 6 CitizenWells, Crime, Government, Law enforcement, Obama, Politics, White House No Comments »

« What’s on the Michelle Obama Rant Tape?, Filmed in 2004 in Chicago IL at the Rainbow/PUSH Coalition Conference at the Sheraton Hotel in Chicago, Michelle Obama spoke at the “Women’s Event”, DVD that Trinity United sold on its website (Previous News)
(Next News) Whitey Tape, API, Phil Berg, and Andy Martin October 21, 2008, “Michelle Obama making disparaging comments about white folks”, “None of my three main sources….have backed off.” »