“The Congressional Budget Office recently warned that Obamacare would “keep hours worked and potential output during the next 10 years lower than they would be otherwise.” That nonpartisan verdict should be bad news for workers.”…Washington Times February 14, 2014

There is not a one to one correlation between the labor force and economy and financial markets.

There will come a day of reckoning and recent Walmart quarterly results may be a harbinger of that.

From Zero Hedge March 3, 2014.
“‘The Market Is Not The Economy’ And The Winner-Takes-All Society”

“You hear that old saw that “the market is not the economy,” a lot these days, and for good reason. As ConvergEx’s Nick Colas notes, the S&P 500 breaks to record highs – but U.S. labor markets remain sluggish; investor portfolios do well – but over 47 million Americans (more than 15% of the population) are still in U.S. food stamp program – the same as August 2012. The important question now is: “Is the market TOO different from the economy?”” 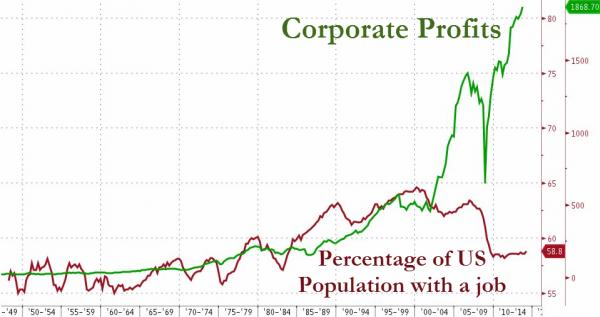 “Record corporate profits – the reason for all-time highs in U.S. equities – come with little hiring or wage gains. The hottest growth stories are business models with lots of customers but very few employees. The recently purchased WhatsApp – for $19 billion – has 55 employees. Investment payoffs – and increasingly social outcomes as well – are technology-enabled, asymmetric and sporadic. How soon before we reach a tipping point?

Last week the local government of San Francisco announced that Google has promised to give $6.8 million over the next two year to pay for over 31,000 low-income young people to use the city’s mass transit system for free. Mayor Edwin Lee applauded the company for helping ease San Francisco’s “Affordability crisis for lower and middle-income families”. Without Google’s help, the successful pilot program would have run out of money in July of this year.

Google’s initiative seems to be a direct response to numerous local protests over its practice of providing free shuttle busses throughout the city for the sole benefit of its employees. Local and often long-time residents, fed up with cost of living inflation from their new stock-option enriched neighbors, see the busses as a symbol of an out-of-touch elite and the companies they serve. Some of the protests have turned violent. Even Wired magazine, a widely read voice of the merits of technology, sees the problem. In the most recent issue: an editorial entitled “Breaking Point: Silicon Valley Can’t Avoid the Haters”, and a back page questionnaire – “Am I a Silicon Valley Douchbag?”

There’s an old Wall Street aphorism that goes “The market is not the economy”, something akin to “A Google bus is not the San Francisco economy.” In both cases, you’d think there were would some correlation. A hugely profitable Silicon Valley should mean a broadly wealthy and generally content “City by the Bay”. And a rocking stock market should indicate a U.S. economy solidly on the mend after the Financial Crisis and accelerating in 2014. Neither seems to be true.”