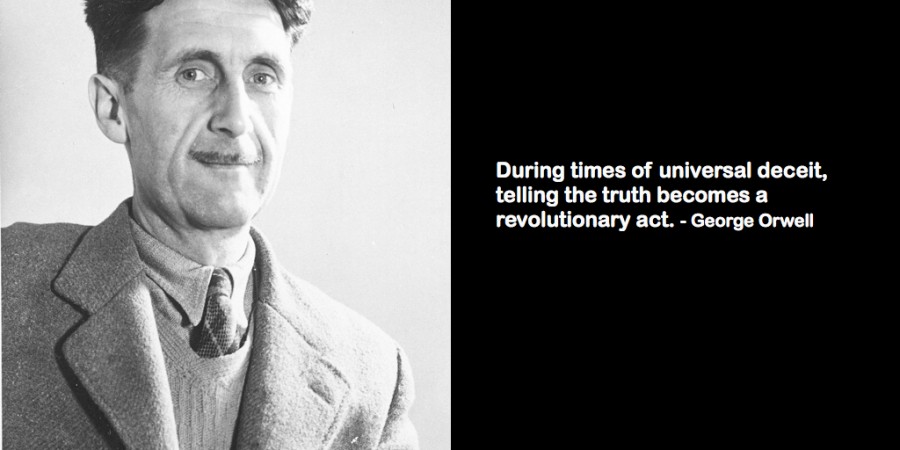 “His earlier thought returned to him: probably she was not actually a member of the Thought Police, but then it was precisely the amateur spy who was the greatest danger of all. He did not know how long she had been looking at him, but perhaps for as much as five minutes, and it was possible that his features had not been perfectly under control. It was terribly dangerous to let your thoughts wander when you were in any public place or within range of a telescreen. The smallest thing could give you away. A nervous tic, an unconscious look of anxiety, a habit of muttering to yourself — anything that carried with it the suggestion of abnormality, of having something to hide. In any case, to wear an improper expression on your face (to look incredulous when a victory was announced, for example) was itself a punishable offence. There was even a word for it in Newspeak: facecrime, it was called.”…George Orwell “1984″

“A Party member lives from birth to death under the eye of the Thought Police. Even when he is alone he can never be sure that he is alone. Wherever he may be, asleep or awake, working or resting, in his bath or in bed, he can be inspected without warning and without knowing that he is being inspected. Nothing that he does is indifferent.”…George Orwell, “1984″

“The US government is not going to be able to cover this up by jailing or murdering me,”…Edward Snowden

Edward Snowden and I have several things in common.

I hope that we have the opportunity to converse.

“Citizenfour has won the Oscar for best documentary, for its director Laura Poitras, editor Mathilde Bonnefoy and producer Dirk Wilutzky.

Collecting the award, Poitras, flanked by journalist and collaborator Glenn Greenwald, said: “The disclosures of Edward Snowden don’t only expose a threat to our privacy but to our democracy itself. When the decisions that rule us are taken in secret we lose the power to control and govern ourselves.” Poitras thanked Edward Snowden for his “sacrifices”, and added: “I share this award with Glenn Greenwald and the many other journalists who are taking risks to expose the truth.”

The team were joined onstage by Snowden’s girlfriend, Lindsay Mills. In response to the news, Snowden himself wrote:

“When Laura Poitras asked me if she could film our encounters, I was extremely reluctant. I’m grateful that I allowed her to persuade me. The result is a brave and brilliant film that deserves the honour and recognition it has received. My hope is that this award will encourage more people to see the film and be inspired by its message that ordinary citizens, working together, can change the world.”

“Congratulations to Laura Poitras. When she filmed Snowden, Glenn Greenwald and myself in Hong Kong, it never occurred to me she had something as ambitious as CitizenFour in mind.

I did not even give much thought to why she was filming: just assumed she wanted a record of events for some undisclosed reason, maybe a low-budget film to be used by privacy campaigners. It came as a surprise when I finally saw it, the sheer professionalism of it, and I had no doubt from that point she would win an Oscar.

Good news for Laura. Good news too for Snowden: he can treat the Oscar as one of his biggest endorsements yet.”

Citizenfour chronicles the revelations by former NSA contractor Edward Snowden that burgeoned into the wider NSA spying scandal. The Guardian and theWashington Post simultaneously began publishing Snowden’s leaked information in June 2013, with both publications winning a Pulitzer prize in 2014 for Public Service journalism. The film’s title derives from the pseudonym Snowden used when he first anonymously contacted Poitras.”