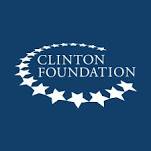 It was retrieved from the Wayback Machine and is therefore presented in it’s entirety.

From NewsMax February 9, 2000 via the Wayback Machine.

Officials with the William J. Clinton Presidential Foundation steadfastly refuse to release the names of its donors, though on Thursday a lawyer for multimillionairess Denise Rich revealed she’d ponied up “an enormous amount.”

And last September, the Chicago Sun-Times confirmed that James H. Levin, a former strip-club owner and now president of TVR Link, had pledged to raise or donate $1 million.

But despite the supposed secrecy that shrouds the identity of other high-rolling foundation backers, the Web site FEC Info (www.tray.com) identified 20 supporters, including Rich and Levin, as early as a year ago.

Burkle, Saban and Wasserman pledged to personally donate a whopping $5 million to $10 million to the Clinton Foundation, reported the paper.

Those pledging to raise or donate at least $1 million include Shorenstein, Winnick, Solomont, Shuman, Simon, Lee, Levin, Azima and Gupta. Pledge figures were not listed for other donors, including Ms. Rich.

No other donor has pledged less than $1 million, which, according to the Post, is the minimum Clinton Foundation contribution.