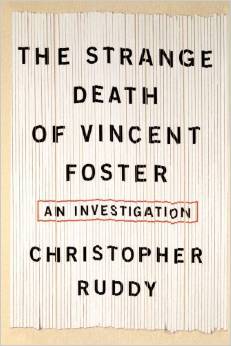 It was retrieved from Free Republic and is therefore presented in it’s entirety.

“Major media outlets reported Wednesday on the Supreme Court hearing of California lawyer Allan Favish’s case that government photographs of Vincent Foster’s death scene be released for public viewing. The media report that no fewer than five investigations have found that Foster committed suicide because he was depressed. But despite 10 years of denial by the major media, the Foster case has not “closed” – as the Supreme Court hearing Wednesday demonstrated.
The case won’t close because of the failure of authorities to make full disclosure – and to conduct a full investigation into the case, including a complete autopsy.

Vince Foster was not only deputy White House counsel but also the personal attorney to Bill and Hillary Clinton.

Since Foster’s July 1993 death, the facts of his death have been obfuscated by friends of Bill and Hillary in the major media, but here’s the undeniable truth:

There weren’t “five” investigations into Foster’s death, as the media report. The Park Police, best known for their meter and horse patrols around Washington, were put in charge of the initial death inquiry of the most important federal official to die suspiciously since President Kennedy. The Park Police, contradicting standard procedure, declared the death a suicide before launching their inquiry.

The FBI never officially investigated the case but simply signed off on the Park Police “probe.” The bureau had little choice. The day before Foster’s death, Bill Clinton hurriedly fired the director of the FBI, William Sessions. Sessions later charged that Clinton had “politicized” the bureau.

Rodriguez, a Harvard-educated federal prosecutor, argued that one of the Polaroid photos taken of Foster at the crime scene indicated an additional wound on Foster’s neck – never noted on the autopsy report. Favish’s suit before the Supreme Court is seeking to release this photo, among others.

No fewer than three of the paramedics on the scene indicated in reports or testimony that the crime scene was consistent with a murder scene, not a suicide.

A careful FBI microscopic investigation of Foster’s shoes found not a trace of soil or grass stains on them, though he supposedly walked several hundred yards through wooded Fort Marcy Park to where his body was found. [Years later, Starr’s investigation found plenty of soil and grass stains. Rodriguez charged that the shoes were tampered with to produce such “evidence.”]

Foster was found with little blood around his body – and despite claims that he fired the gun into his mouth, practically no blood was found on the front of his shirt.

Foster was found with a 1913 revolver no one in his family could claim, with two serial numbers, made from the parts of three or more guns. None of Foster’s fingerprints were found on the gun.

The bullet that supposedly killed Foster was never found, despite intensive searches.

Despite claims to the contrary, no one who knew Foster, including Hillary, Web Hubbell and his own wife, saw signs of depression.

A so-called suicide note was found in an office briefcase that had been searched and found to be empty after Foster’s death. The note was torn into 27 pieces. Yet an FBI examination found no trace of Foster’s fingerprints on the note and a top Oxford handwriting expert found the note to be an “obvious” forgery.

Despite the enormity of the case, Foster’s autopsy lasted an astounding 45 minutes. The coroner in the case had previously been overruled in other cases he declared “suicides” that were later found to be murders.

All of the X-rays taken during the autopsy are missing.

Complete crime scene photos don’t exist. The Park Police said all the photos were “accidentally” overexposed. A series of close-up Polaroids, which Favish is suing for, remain. This is just a brief summary of the dozens of inconsistencies in the case. Two New York homicide investigators who looked into the case concluded that Foster’s body had been moved to the crime scene and that murder could not be ruled out.

Despite overwhelming evidence of a cover-up, the media won’t question the official ruling.

Ken Starr, who could find no criminal wrongdoing on the part of the Clintons during his “intensive” probe, confirmed a ruling of suicide. Starr even hired O.J. Simpson’s defense expert to prove his case.

If ever there were a case for public disclosure of government records and photos, it’s the Vince Foster case. The high court should decide in Allan Favish’s favor.”