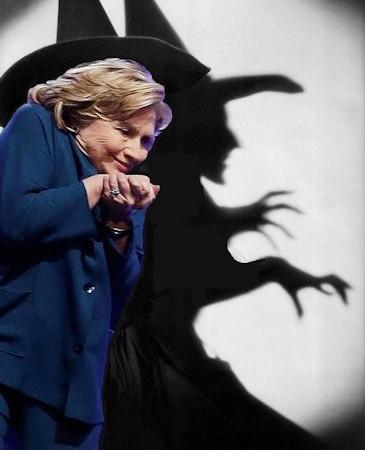 A just-retired Secret Service agent who spent five years on
Hillary Clinton’s protective detail has told a Newsmax source
that “only one word adequately describes that woman: witch.”

This is but the tip of the iceberg. In my Predictions column at
the end on 2000 I predicted that in the coming months and years
we will be inundated, finally, with the truth about the
absolutely awful behavior of Bill and Hillary Clinton.

Not just the criminal stuff, but the boorish, rude, arrogant,
condescending and demeaning behavior that comes from insecure
low-lifes who suddenly find themselves living in the White House.

The Clintons, we are certain to learn, treated the domestic staff
horribly. These are the valets, maids, porters, cooks, drivers,
baggage handlers and other permanent White House personnel who
are assigned to the “Residence”, the living quarters of the
First Family.

The Clintons undoubtedly treated these folks rudely, abruptly and
with contempt.

Hillary’s famous “I could have stayed home and baked cookies”
remark belies her contempt for household chores, and those who
perform them.

So this Secret Service agent’s observation is a glimpse into what
we can expect in the future: books, articles and interviews with
White House personnel after they retire.

Meanwhile, Hillary, despite the fawning national news media’s
ongoing love affair with her, continues to exhibit a “political
tin ear.”

How else to explain yesterday’s front page NEW YORK POST
revelation that she is renting the most expensive district office
of any US Senator in the entire nation?

She is paying, excuse me, you, the taxpayer are paying –
$514,000 per year for a massive office on 49th in Manhattan. Yet
her New York colleague, Senator Charles Schumer, is paying
$209,000 for his office only 2 blocks away!

Under government rules Hillary is allowed to spend the $514,000.
But that is not the point. You would think that after the flap
over her husband’s rent in Manhattan she would back off creating
yet another firestorm.

After the “stealing the White House furniture” story and then the
ongoing Pardongate Investigation, she would not want yet another
spate of unfavorable publicity.

But apparently, this woman who somehow got herself elected last
year, did she con New Yorkers into drinking her “witch’s brew”?
– has no political sense whatsoever. Could this massive office
and the associated negative publicity be worth it all?

Did you know that Senators rarely even go to their district
offices? They spend most of their time in their Capitol Hill
office. When they are out of session they travel their states or
else go on government-paid “fact-finding trips”, better
described as junkets.

True, they do have full-time staffs in these satellite offices
supposedly handling constituent problems.

But Hillary’s new office is beyond that. It is more in tune with
a Presidential campaign headquarters.

And maybe that is just what it is.

Maybe Hillary, despite all the negative stories, criminal
investigations and plummeting poll ratings, can cast a spell
over the whole country and move back into the White House.

And you know what? If the GOP runs as inept a campaign against
her then as they did here in New York last year, she might very
well win.

On the other hand, if Republicans wise up they might realize that
Hillary can be stopped, even here in New York.

Her future is not guaranteed. She is no “lock” for higher office.

In fact, her re-election in 2006 is not guaranteed either.

But the Republican Party needs to learn how to campaign against
her. The GOP first has to ‘earn’ the right to defeat her.

In the coming weeks we will discuss this in more depth.”