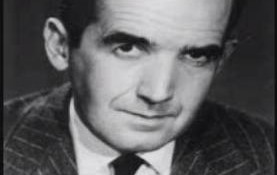 Edward R. Murrow Wires & Lights in a Box Speech, October 15, 1958, RTNDA convention, TV radio news v advertising interests, There is a great and perhaps decisive battle to be fought against ignorance, intolerance and indifference “We must not confuse dissent with disloyalty. We must remember always that accusation is not proof and that conviction depends upon evidence and due process of law. We will not walk in fear, one of another. We will not be driven by fear into an age of unreason, if we dig deep inRead More

Barnett Keyes et al v Obama, Obama attorneys response, 9th Circuit Court of Appeals “Why has Obama, for over 2 years, employed numerous private and government attorneys to avoid presenting a legitimate birth certificate and college records?”…Citizen Wells and millions of concerned Americans What does the above statement mean? Those in denial about Obama, his character and his past tend to dismiss such statements as fiction. I assure you that it is based on solid facts, court records. Here is one of many examples. From the Obama attorneys response toRead More

Glenn Beck is on TV speaking the truth about Che Guevarra and Chairman Mao. Beck has pointed out the disregard for human life of these two revolutionaries and the millions of lives lost or made miserable by their actions. Anita Dunn, Communications Director,  is part of a White House team chosen to monitor and attack Fox News. Beck  is now showing a video of Anita Dunn speaking on June 5, 2009. One of her favorite political philosophers is Chairman Mao. Once again, Beck has pointed out the red telephone dedicated toRead More

This is just in from Aristotle the Hun, a Family Therapist and clergyman who has been in contact with attorney Leo Haffey, who has been incarcerated without bond in Nashville TN, and Haffey’s family. October 15, 2009. “Subornation of perjury in Leo Haffey Case” “Subornation of perjury is a legal term describing the crime of persuading another to commit perjury. Leo Haffey’s wife has reported to me that she was pressured, threatened and intimidated by a lawyer in Nashville who was a neighbor of Leo’s, Brent Horst. Mr. Horst wantedRead More

From Aristotle the Hun, regarding attorney Leo Haffey, who remains in jail with no bond. Here are more notes from Leo, today, Thursday, October 15, 2009: “We transcribe these letters from Leo as time permits. Thanks to those who have contributed to Leo’s defense fund. So far we have $610. That probably wouldn’t be enough to tempt a law student to look at the case, Leo is going back to court on October 20th. I sure would like to make sure he is represented by someone who actually cares aboutRead More