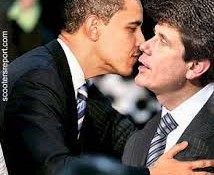 Blagojevich appeal prediction, Reduced sentence or Obama pardon, 6 Seventh Circuit Appeals Court sessions before Nov 4, Obama protection continues, Obama Rezko ties, Blagojevich fall guy   Why did Patrick Fitzgerald and the US Justice Department wait until December 2008 to arrest Rod Blagojevich?”…Citizen Wells “I believe I’m more pristine on Rezko than him.”…Rod Blagojevich “There is enough corruption in Illinois so that all it takes is someone who is serious about finding it to uncover it. If a U.S. attorney is not finding corruption in Illinois, they’re not seriouslyRead More

Blagojevich trial, Obama Rezko ties, Black Panther case dismissal Will the Rod Blagojevich trial end sooner than projected? Will Tony Rezko or Stuart Levine be called as witnesses? Will the focus of the Blagojevich trial continue to be on the senate seat? We know this: By the time Rezko was convicted in June 2008, the feds had enough to indict Blagojevich. The US Justice Dept. waited until December 2008, after the election to arrest Blagojevich. Federal prosecutor Patrick Fitzgerald was given a supervisory assignment by Obama early in 2009. TheRead More

Blagojevich trial, Obama and Rezko, Blagojevich defense subpoena Here is a small but important exerpt from the Blagojevich defense motion to subpoena  Barack Obama for the Blagojevich trial, set to begin June 3, 2010. “22. However, the defense has a good faith belief that Mr. Rezko, President Obama’s former friend, fund-raiser, and neighbor told the FBI and the United States Attorneys a different story about President Obama. In a recent in camera proceeding, the government tendered a three paragraph letter indicating that Rezko “has stated in interviews with the governmentRead More

Blagojevich trial, Update, Tony Rezko, Obama subpoena, Obama Rezko ties Where is Tony Rezko, convicted crime buddy of Blagojevich and Obama? From the Washington Examiner. “Where in the world is Tony Rezko?” “Why is Antoin “Tony” Rezko under lock and key at an undisclosed location, like some sort of CIA-renditioned al Qaeda operative? And why hasn’t he been sentenced yet? As the June 3 corruption trial of former Illinois Governor Rod Blagojevich for allegedly trying to sell Obama’s former Illinois Senate seat approaches, the whereabouts of the former Blago andRead More