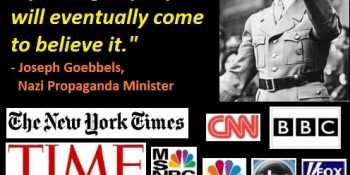 If you have not been following the arrest and incarceration with no bond, of attorney Leo Haffey in Nashville, TN, I urge you to read the recent articles on this blog. You will be outraged. A lot of facts regarding the case have been presented on this blog. The charges made against Leo are highly suspicious and the bond hearing judge, Gloria Dumas, recently had a lengthy formal complaint filed against her by the Tennessee Judiciary Committee, just a few days after Haffey’s hearing. Leo Haffey filed a motion fromRead More

The Democrat party is being run by a bunch of modern day Nazi Germany BrownShirts. The Obama Camp is an integral part of orchestrated efforts to control the flow of information available to the American Public. Bloggernews.net is reporting that they have evidence that attempts to shutdown anti Obama sites are coming from the official Obama website, barackobama.com, and the Obama Campaign. Here are some exerpts from that story: “At least one of the attacks in the latest wave of blog shutdowns this past week came from IPs assigned toRead More