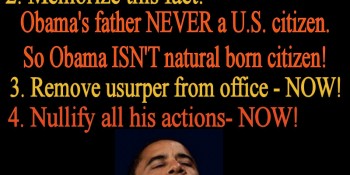 Obama can be removed from office by Section 3 of 20th Amendment, Crossville Chronicle, May 9, 2011, Obama not natural born citizen, Father not US citizen, Ted Cruz also ineligible   From the Crossville Chronicle May 9, 2011. “Why was President Obama’s birth certificate even being discussed? It was due to a clause in Article II, Section 1 of the U.S. Constitution, which states “ No person except a natural born Citizen, or a Citizen of the United States, at the time of the Adoption of this Constitution, shall beRead More

Stuart Levine sentencing June 28, 2011, Rezko Blagojevich Obama crony, Levine among most valuable witnesses in 3 decades, Blagojevich arrest delayed “Why did Patrick Fitzgerald, instead of protecting the citizens of Illinois as he has touted, prosecute Tony Rezko first, a businessman, instead of Rod Blagojevich, the governor of Illinois.”…Citizen Wells “Why did Patrick Fitzgerald and the US Justice Department wait until December 2008 to arrest Rod Blagojevich?”…Citizen Wells “At Rod Blagojevich’s December sentencing Assistant U.S. Attorney Reid Schar called Levine one of the most significant cooperators the Dirksen FederalRead More

December 27, 2011, Obama money from Rezko, Daniel Frawley talking?, Frawley sentencing delayed, Tribune and SunTimes silent “Why has the Daniel Frawley sentencing been repeatedly delayed?”…Citizen Wells “Why has the Chicago and mainstream media ignored the Obama and Daniel Frawley connections and the money given to Obama by Rezko?”…Citizen Wells “And if all others accepted the lie which the Party imposed –if all records told the same tale–then the lie passed into history and became truth. “Who controls the past,” ran the Party slogan, “controls the future: who controls the presentRead More