“Why did Mutual Bank fire whistleblower Kenneth J Connor after he
challenged the appraisal on the land purchased by Rita Rezko, just
prior to the land sale to Obama?”…Citizen Wells

“Why did the Rezkos enter into an agreement to purchase the lot next to the Obama house and pay the asking price of $ 625,000 at a time when they were broke and heavily in debt?”…Citizen Wells

I just spoke to Kenneth J. Conner the whistleblower in the Obama Rezko lot purchase and the loan from Mutual Bank of Harvey to Rita Rezko. The press release for his new book “Rezko for Radicals” is live. 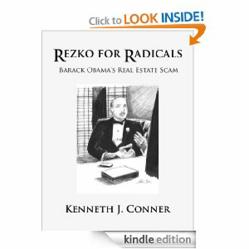 Rezko for Radicals is available on Amazon

Agents and I talked about payoff, bribe, kickback for a long time

In his new book Rezko for Radicals, author Kenneth J. Conner, formerly a real estate analyst at Tony Rezko’s bank in Chicago, presents a carefully researched and insider accounting of Rezko’s real estate transactions involving Barack Obama. Conner details a meeting with the FBI in October 2007 in which he advised agents that the Rezko lot next door to the Obama Mansion was worth a maximum of $500,000. Rezko paid $625,000. Later it became known that another appraisal valued the Rezko lot at $490,860. (Cook County court case # 2008L011470) abcnews.go.com/images/Politics/doc1%20-%20Copy.pdf