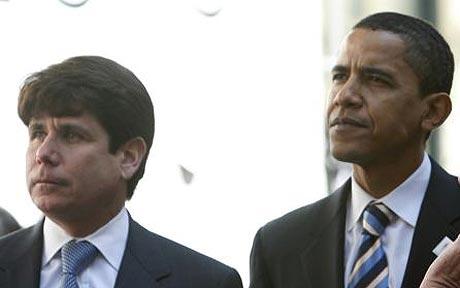 “Why did the Illinois Senate Health & Human Services Committee, with Obama as chairman, create and push Bill 1332, “Illinois Health Facilities Planning Act,” early in 2003, which reduced the number of members on the Board from 15 to 9, just prior to rigging by Tony Rezko and Rod Blagojevich?”…Citizen Wells

“Why did Patrick Fitzgerald, instead of protecting the citizens of Illinois as he has touted, prosecute Tony Rezko first, a businessman, instead of Rod Blagojevich, the governor of Illinois.”…Citizen Wells

“Why did Patrick Fitzgerald and the US Justice Department wait until December 2008 to arrest Rod Blagojevich?”…Citizen Wells

“We AFFIRM the judgment of the district court.”

“A longtime friend of U.S. Rep. Jesse Jackson Jr.who was at the center of a Senate seat scandal that sent ex-Gov. Rod Blagojevich to prison was arrested Wednesday in his own federal fraud case, accused of bribing doctors to send patients to his surgical centers.

Raghuveer Nayak, a wealthy businessman and former campaign fundraiser for both politicians, was indicted on charges he secretly paid hundreds of thousands of dollars to physicians from 2000 to 2010 to have patients referred to Rogers Park One Day Surgery Center, Lakeshore Surgery Center and other Chicago-area facilities he owned.

The investigation of his businesses had hung over Nayak’s head for years, and his lawyer, Thomas McQueen, said the charges were not unexpected. “He knew this had never gone away,” McQueen said after the FBI arrested his client at Nayak’s Oak Brook home.

A frowning Nayak appeared Wednesday at the Dirksen U.S. Courthouse in a rumpled shirt and entered a plea of not guilty to the 19 fraud counts against him. U.S. Magistrate Judge Maria Valdez ordered him released on a $10 million bond secured by six properties in Illinois and Indiana after Assistant U.S. Attorney Christopher Niewoehner told the court that Nayak has “rather significant assets” and ties to India.

Nayak left the courthouse without commenting.

In making their case against Blagojevich, federal authorities alleged that it was Nayak, a longtime friend of the Jackson family, who offered up to $6 million in campaign money in exchange for Jackson being named a senator. Blagojevich was found guilty on corruption charges last year that included counts involving the attempted sale of the U.S. Senate seat vacated by Barack Obama after his 2008 election to the presidency.

Nayak was never charged in the Blagojevich case, and he quickly spoke with authorities after Blagojevich’s arrest in a bid for leniency. But he never was used as a witness, either, and investigators continued to look into his businesses.

Jackson testified at Blagojevich’s trial that he had no knowledge of a scheme to buy the Senate seat.

The indictment of Nayak is seen as one of the final offshoots of the sweeping federal investigation known as Operation Board Games, which in addition to Blagojevich led to convictions of fundraiser Antoin “Tony” Rezko, formerAld. Edward Vrdolyak, Republican power broker William Cellini and others. One of the final sentences in cases connected to that probe could be handed down as soon as next week, when political insider turned federal witness Stuart Levine is expected to learn his punishment.
Sources have confirmed that the Board Games investigation is wrapping up. U.S. Atty. Patrick Fitzgerald is leaving office at the end of the month, and one of the lead prosecutors against Blagojevich, Reid Schar, already has left.

Although he raised money for politicians for more than a decade, Nayak mostly worked under the radar until his connections to Blagojevich and Jackson surfaced in 2008 as part of the burgeoning federal investigation into the governor’s office.”

“The indictment unsealed Wednesday alleges as part of the scheme that “physicians deceived their patients by not disclosing that they were being paid for making referrals to Nayak’s facilities,” but Nayak was the only person charged. He allegedly created false contracts to disguise some of the illicit payments, describing them as money for advertising, according to the document.

Prosecutors are seeking $1.8 million in “alleged fraud proceeds” in the case.

In one kickback scheme, prosecutors alleged, Nayak paid one person, identified only as “Individual A,” more than $2 million in checks drawn on his surgery centers’ accounts. In return, “Individual A” gave Nayak cash equaling about 70 percent of the value of the checks, according to the indictment.

In the Blagojevich case, Nayak’s friend Bedi testified that Nayak issued about $2 million in checks to a Bedi-owned company. Bedi testified he provided cash in return and said he knew Nayak was cheating on his taxes by making the payments.

Nayak’s businesses have over the years needed the approval of state regulators and auditors, and Nayak became a big campaign bundler and contributor, donating more than $779,000 to elected officials including Blagojevich, Attorney General Lisa Madigan and Obama from the late 1990s until his name surfaced in the Blagojevich scandal.

The Tribune previously reported that after Nayak first opened several Chicago drugstores in the early 1980s, his businesses faced multiple audits by state and federal authorities. His name also came up repeatedly in one of the largest health care fraud investigations in Illinois history.

That multiyear federal probe resulted in the shuttering of two hospitalsDoctors Hospital and Edgewater Medical Centerand the convictions of seven doctors and administrators. Nayak, who then owned a lab testing company called NR Laboratories as well as an outpatient surgery center, was among numerous people who came under scrutiny, the Tribune had reported.

Some of Nayak’s associates and friends were convicted in the scheme, which included charges that two patients died from unnecessary procedures performed by doctors looking to collect fraudulent public aid checks.”

Aurora Mayor Tom Weisner, boytoy Gerry Galloway and
crony Raghuveer Nayak are viewing a property in downtown
Aurora in the path of a major development back in 2005.
Nayak is spreading his money around. All the way to Iowa.”

“Raghuveer Nayak, the campaign crony who has dumped tens of
thousands of dollars into the campaign pockets of Aurora
Mayor Tom Weisner and Illinois Gov. Rod Blagojevich, seems
to in a race to compete with another star campaign donor
from Illinois, Tony Rezko, to see how many people he can
contribute to and apparently “influence.”

While Rezko’s list includes some power names in Illinois,
including our local political rockstar, U.S. Senator and
Presidential candidate Barack Obama, Nayak seems to be
broadening his geographical reach (and Nayak is a Hillary
Clinton buddy).””

SHOMON CONNECTIONS TO WEISNER AND AURORA, IL
“Dan Shomon, who’s background is in media, has a lobbying
contract for the City of Aurora (scroll down or click for
our post on how Dan Shomon is fleecing the taxpayers of
Aurora). He got that contract after helping to secure a
political endorsement of Sen. Barack Obama for then-candidate
for Mayor of Aurora, Tom Weisner. That’s after
Obama said he wan’t going to be a “kingmaker” in Aurora.

We think it’s HIGHLY unethical of Dan Shomon or Tom Weisner
to exploit the taxpayers of Aurora for political purpose.
Barack Obama’s credibility is also risked in the process of
Shomon and Weisner’s games at the expense of taxpayers.”

“Like the ill-advised connection to Obama in Aurora, thanks
to Dan Shomon, Obama is mentioned in the same discusion with
all these problems with Giannoulias. Not good for a
political rockstar who otherwise could be on his way to
becoming President of the United States.””
“Aurora Mayor Thomas J. Weisner gave Shomon the lobbying
gig in exchange for political work, including getting the
endorsement of Barack Obama back in 2005 when Obama first
said he would remain “neutral” in the heated mayoral race.

Shomon’s main activities are political campaigns and helping
Obama and his friends like Alexi Giannoulias who is now the
Treasurer for the State of Illinois.”

“Plus, when all hell breaks loose on Weisner’s various problems
with cronyism and allegations of corruption (and it WILL),
it’s probably in Obama’s interest that Dan Shomon has nothing
to do with Weisner any longer.”