Ouija board for tots, Toys R Us, Pink edition, Girls eight years old and up, Regular version all children eight and up, Spirit world, Compromise our souls

With the battle for the minds and souls of our youth raging all around, this report is scary.

“Ouija board a controversial toy for tots”

“Toys R Us is selling Ouija boards, promoting them as acceptable for children as young as eight years old.

The pink edition of the Ouija board is listed for girls eight-years-old and up while the regular version is designated for all children eight and up. Stephen Phelan, communications manager of Human Life International, checked the website and reports that the findings are disturbing.

“It is just troubling that these things are treated as casually as any other game, like Monopoly or anything else on this Toys R Us site — and I think it’s something Christians should be aware of and really not support,” he states.”

The manufacturer of the product is Hasbro.”

A internet search on “Ouija board pink edition” yielded this:

A click on Babies R Us went to the  Toys R Us website with no product showing.

It appears that Toys R Us has removed the product.

I then clicked on the Amazon.com link. 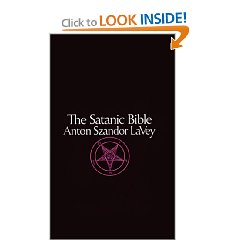 “One might expect The Satanic Bible at least to offer a few prancing demons or a virgin sacrifice, but if you hopped this train expecting a tour of the house of horrors, you’re on the wrong ride. Far from a manual for conquering the realms of earth, air, fire, and water, The Satanic Bible is Anton LaVey’s manifesto of a new religion separate from the “traditional” Judeo-Christian definitions of Satanism. While LaVey rails against the deceit of the Christian church and white magicians, he busily weaves his own deceptions.
The Satanic Bible claims the heritage of a horde of evil deities–Bile’, Dagon, Moloch, and Yao Tzin to name a few–but these ancient gods have no coherent connection between each other or to Satanism, except that all have been categorized by Christianity as “evil.” Calling on these ancient names like a magician shouting, “Abracadabra,” LaVey attempts to shatter the classical depiction of Satanism as a cult of black mass and child sacrifice. As the smoke clears, he leads us through a surprisingly logical argument in favor of a life focused on self-indulgence. The Satanic Bible is less bible and more philosophy (with a few rituals thrown in to keep us entertained), but this philosophy is the backbone of a religion that, until LaVey entered the scene, was merely a myth of the Christian church. It took LaVey, and The Satanic Bible, to turn this myth into a legitimate public religion. –Brian Patterson”

Compromise our souls, Girls eight years old and up, Ouija board for tots, Pink edition, Regular version all children eight and up, Spirit world, Toys R Us Education No Comments »