“One of the CBO’s most intriguing estimates is that by 2017 there will be 2 million fewer full-time jobs on the market than there would have been without Obamacare, and that figure could climb to 2.5 million by 2024.”…Market Watch February 4, 2014

Smoke and mirrors will work for a while.

The 2014 elections helped reveal the truth.

The financial markets have been propped up by the fed.

There has been a disconnect between Wall St. and Main St. or more troubling, no street, no home no hope.

2.5 million children in the US are homeless.

Obama’s self serving policies are a big reason for this.

Record numbers of people have dropped out of the labor force.

Record numbers of people have had their hours reduced or could only find part time jobs as a direct result of Obamacare.

Record numbers of people depend on public assistance.

From the National Center for Family and Homelessness.

“Prevalence of Child Homelessness in the United States
Based on 2013 data released in September 2014 by the U.S. Department of Education, combined with an estimate of younger non-school aged homeless children in the U.S., the number of children experiencing homelessness annually is 2,483,539—or 2.5 million children, an historic high. Using U.S. Census estimates of the total population of children under 18 years in 2013, this represents one in every 30 children.1” 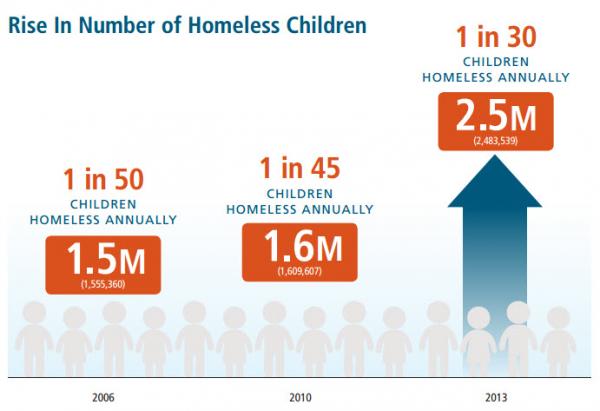