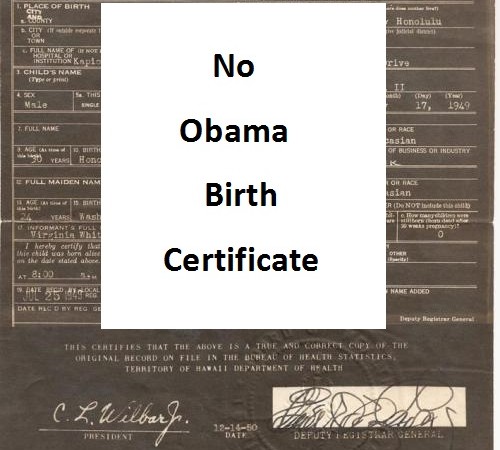 I am a computer and business systems expert. Of the many aspects of computer systems and data I was involved in, I worked for a software company in the early 1980’s that dealt with OCR software and readers. I provided my analysis of the document placed on WhiteHouse.gov yesterday.

“When you view the document placed on WhiteHouse.gov remember it was computer generated. It is not an image file of a complete original birth certificate. It is a composite of data entered into a database(s) in the Hawaii computer systems. The data is as good as the source and the procedures and personnel who controlled the entry and maintained the integrity. From a legal standpoint it proves, if authenticated as having come from the state of Hawaii, that Obama is a US Citizen. It does not prove that he is a natural born citizen.”

Jana Winter of Fox news presented this article on April 29, 2011.

“The White House has released President Obama’s long-form birth certificate, saying the document is “proof positive” the president was born in Hawaii.

It didn’t take long for some of President Obama’s doubters to claim the long-awaited birth certificate posted online by the White House on Wednesday had been altered or might be a fake.

But a leading software expert says there’s no doubt about its authenticity, and he dismisses claims of fraud as flat-out wrong.

The doubters have latched onto the idea that Adobe Illustrator — the premier program for computer graphic artists — “reveals” evidence of document manipulation in the Obama birth certificate. They note Illustrator reveals nine separate layers of the document, and claim it’s “proof” the file has been altered.

But that’s not so, says Jean-Claude Tremblay, a leading software trainer and Adobe-certified expert, who has years of experience working with and teaching Adobe Illustrator.”

The article heading is at least misleading or an outright lie.

Why does the article contain these statements?

“But a leading software expert says there’s no doubt about its authenticity, and he dismisses claims of fraud as flat-out wrong.”

A disturbing trend has developed at Fox. Bill O’Reilly misled the American people for several years by stating that he had done research and that Obama was born in Hawaii. We recently got confirmation that he relied on the birth announcements. Now Jana Winter misrepresents what the Adobe software expert has said.

Did Fox make a deal with the devil?

Jana Winter or Fox, contact me. I am not just a Adobe or OCR expert, I have expertise over a broad area in IT for over 30 years. I also am an expert on the Obama birth certificate and eligibility controversies as well as the Rezko and Chicago corruption ties.

Fox, can you handle the truth?