NAR May 2014 existing home sales report, All but million dollar plus homes sales down, Wealthy propping up US housing market, Housing recovery only for the richest

NAR May 2014 existing home sales report, All but million dollar plus homes sales down, Wealthy propping up US housing market, Housing recovery only for the richest

From the NAR Summary of May 2014 Existing Homes Sales Statistics. 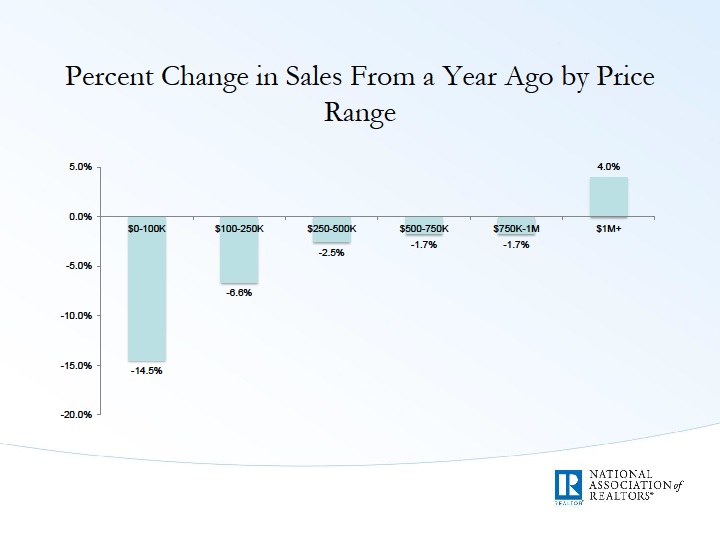 “Guess Who Is Propping Up The US Housing Market”
“Needless to say, what the chart showed was the symptomatic, and schizophrenic, breakdown of US housing into two camps: the housing market for the 1%, those costing $750K and above, where the bulk of transactions are mostly between non-first time buyers, and typically take place as all cash transactions, and the market for “everyone else” which continues to deteriorate.

Moments ago the NAR released its May data, which on first blush was widely lauded as bullish: the topline print came at a 4.9% increase, rising from 4.65MM to 4.89MM, above the 4.74MM expected. Great news… if only on the surface. So what happens when one drills down into the detail? As usual, we focused on the last slide of the NAR breakdown, located at the very end of the supplementary pdf for good reason, because what it shows is hardly as bullish.”
“Housing recovery? Maybe for the richest, and even they are far less exuberant about purchasing $1MM+ mansions. For everyone else, enjoy “plunging” hedonically-adjusted LCD TV prices. Everything else is, well, noise.”

All but million dollar plus homes sales down, Housing recovery only for the richest, NAR May 2014 existing home sales report, Wealthy propping up US housing market CitizenWells, Economy, Employment, Obama No Comments »