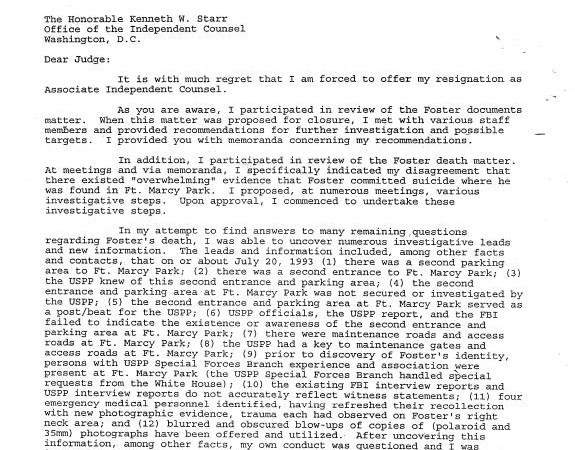 “Rodriguez blew the whistle on Ken Starr in March 1995. But no one listened.

Starr hired Rodriguez in September 1994 to lead the grand jury investigation of Vincent Foster’s death. A Harvard Law School graduate with a keen interest in civil-rights cases, Rodriguez was, as NewsMax.com founder Christopher Ruddy wrote in “The Strange Death of Vincent Foster,” “a bohemian among law enforcement types – the only federal prosecutor who wore a pony-tail.”

“He had no ideological investment in the matter,” writes British journalist Ambrose Evans-Pritchard in “The Secret Life of Bill Clinton.” “Indeed, when he arrived from California with his ponytail, his earring, and his leather jackets, there were comments among the hard-liners that Kenneth Starr had gone too far in his efforts to recruit Democrats, liberals and ethnic minorities to his team.”

The hard-liners were wrong. Rodriguez turned out to be an unusually honest and courageous public servant. He resigned in protest after less than six months on the job, calling the Foster probe a sham. Major media refused to run his story. His career stopped dead. Rodriguez returned to his old job of assistant U.S. attorney in Sacramento, where he remains to this day.

Many people, when confronted with Rodriguez’s story, ask how such a massive cover-up could occur without more people stepping forward. Rodriguez addressed that question in a taped statement that was later posted to the Internet.

“Everyone makes a very big mistake when they believe a lot of people are necessary to orchestrate some results,” he said. “All people need to know is what their job is, not why – be a good soldier, carry out the orders.” A couple of people in positions of authority would suffice, says Rodriguez, to “control the central figures in the investigation.”

Regarding the claim that several investigations ruled Foster’s death a suicide, Rodriguez says, “In fact, all of the investigations were done by the same people, the FBI.””

“Ken Starr hired Miquel Rodriguez as lead prosecutor for the Vincent Foster investigation in September 1994. Soon after,Rodriguez was told that he was expected to back up the conclusion of the earlier Fiske report – that Foster had committed suicide. Rodriguez refused. He insisted on conducting a real investigation. But the harder he tried, the more resistance he got from Starr’s team.

The last straw came on Jan. 5, 1995, when the Scripps Howard News Service ran a story claiming that “sources familiar with the Starr inquiry,” said that Kenneth Starr was ready to announce that Vincent Foster “committed suicide for reasons unrelated to the Whitewater controversy.”

Rodriguez was furious. He had just begun grand jury proceedings the day before. Who on earth would have leaked the news that the probe was finished? Rodriguez stuck it out for a few more weeks, but finally resigned in March. “As an ethical person, I don’t believe I could be involved in what they were doing,” he told Ruddy.

Rodriguez’s sudden resignation could have exploded in scandal. But Big Media virtually ignored it. Indeed, Rodriguez claims that he tried to go public with his story, giving extensive interviews to reporters from Time, Newsweek, ABC’s “Nightline,” the Boston Globe, the Atlanta Journal-Constitution, and the New York Times. Rodriguez says he spent six hours with the New York Times reporter alone. To all of them, Rodriguez told the same story: Starr’s probe of Vincent Foster’s death was a sham.

“I was told what the result [of the Starr investigation] was going to be from the get-go,” Rodriguez later said in a taped conversation, posted to the Internet. “This is all so much nonsense – I knew the result before the investigation began, that’s why I left. I don’t do investigations to justify a result.”

None of the news organizations which interviewed Rodriguez aired or published his account. Several reporters admitted toRodriguez that their editors had spiked the story. Rodriguez also claims that FBI agents bullied him, making threats against his family and his “personal well-being,” if he did not shut up. “The FBI told me to back off, back down. I have been communicated with again and been told to be careful where I tread,” says Rodriguez.

To this day, Rodriguez still serves as an assistant U.S. attorney in Sacramento.”