Leo Donofrio has provided an update today, Sunday, November 23, 2008 regarding his NJ lawsuit that is before the US Supreme Court.

United States Supreme Court docket no. 08A407, Donofrio v. Wells, is now “Distributed for Conference of Dec. 5th, 2008″ to the full Court meeting in private on that date. The case was the subject of previous sabotage by SCOTUS stay clerk, Danny Bickell (as well as judicial misconduct by NJ Appellate Division Judge Jack M. Sabatino). Bickell, after receiving the emergency stay application which requested extraordinary relief to stay the national election, took it upon himself to deny the application on the very time sensitive date it was filed, Nov. 3, a day before the election day popular vote.

As it stands, this case, and the Presidency, now rest in the hands of the nine Supreme Justices, a situation that could have come to pass prior to the votes being counted on election day had Mr. Bickell actually done the job he’s paid to do – be a clerk – as opposed to his specious illegal attempt to play Supreme Court Justice and overrule the long standing precedent of McCarthy v. Briscoe, 429 U.S. 1317 (1976). Please note that the link provided goes to the 5th Circuit follow up action as all links to the actual Supreme Court decision appear to have been mysteriously cut off.

Incredibly, the McCarthy v. Briscoe case provides multiple controlling precedent to the justiciability of the action now before the Supreme Court. No wonder this Supreme Court decision can’t be found online...anywhere. Hopefully, broken links to the case will be resolved as this blog makes the rounds.

The American people need to familiarize themselves with McCarthy v. Briscoe 429 U.S. 1317 (1976) (check note 1 when you find the case) in order to understand the precedent which supports the relief requested by Donofrio.

That case is relevant as to the procedural grounds Mr. Bickell incorrectly (and illegally) applied in denying to pass on Donofrio’s stay application. But more important is that the case also provides supporting precedent for Donofrio in that US Supreme Court Justice Powell, late in the 1976 Presidential cycle, intervened on behalf of 3rd party candidate Eugene McCarthy, and forced the Texas Secretary of State to include McCarthy on the ballots after McCarthy made an emergency application to the Supreme Court.

In the first count of Donofrio’s stay application, he had requested the SCOTUS remove the names of Obama and McCain from New Jersey ballots. (His second count also requested that the SCOTUS stay the national election.) McCarthy v. Briscoe stands for the precedent that the SCOTUS has the power to order a Secretary of State to include or remove names from ballots when a Constitutional issue has been invoked.

The case is also procedurally relevant because Bickell told Donofrio he didn’t submit the stay application to Justice Souter because it failed to meet the criteria of Supreme Court Rule 23.3 in that Donofrio’s NJ Supreme Court request for emergency relief used the words “injunctive relief” instead of the word “stay” and therefore Donofrio had failed to request a stay in the lower court and was not thereafter allowed to come to the US Supreme Court with such a request.

This was a disgusting attempt at one of the worst bluffs I’ve ever seen. Bickell was called with a lightning fast “all in” only to be found holding the infamous 7-2 off suit and the flop, turn and river all failed to connect with his crap holding because:

1. Donofrio did request a “stay” in his initial Appellate Division complaint. Also, the NJ Attorney General’s office argued, in their reply brief, against the court issuing a “stay”.

2. Donofrio’s NJ Supreme Court motion relied on his full lower court record when he requested a “Motion for injunctive relief” from the NJ Supreme Court by way of a signed certification and the submission of a 75 page appendix which Bickell did not have in his possession to review.

3. A stay is “injunctive relief”. Any first year law student would know that. But Mr. Bickell is a staff attorney at the United States Supreme Court. He knew damn well that the interference he ran was willfull misconduct.

4. The case has actually been distributed for conference of all nine Justices, a situation Bickell tried to prevent.

“Indeed, an application styled as one of for a stay, if it in fact seeks some form of affirmative relief, may be treated as a request for an injunction and disposed of accordingly.”

Isn’t that just amazing. Stay clerk Bickell tried to overturn historic United States Supreme Court precedent when he refused to pass on my stay application based on a false semantic attack not even grounded in law, but rather directly opposed to it. Had Bickell treated the emergency application with the dignity it deserved, the issue of whether Obama and McCain were Constitutionally eligible to be President could have been settled prior to the popular vote.

Had Bickell passed the stay application to Justice Souter on Nov. 3, Souter would have denied it straight away, as he did when it was passed on to him on Nov. 6. Then if Bickell had followed US Supreme Court Rule 22.6, which required that Donofrio be notified of the disposition of the stay application “by appropriately speedy means”, Donofrio could have renewed the application to Justice Clarence Thomas on the evening of Nov. 3, or the next morning at the latest, and the SCOTUS could have stayed the popular vote until they made a decision on the merits.

But Bickell not only failed to pass on the application, he never gave Donofrio any notice whatsoever until Donofrio finally got through to Bickell‘s phone on Nov. 6 when Bickell told Donofrio that since he – not a Supreme Court Justice – had disposed of the case, no disposition notice was necessary at all. To hell with Rule 22.6.

Now that the popular vote has been recorded, Bickell has made a difficult situation ever more dangerous as millions of citizens who voted for Obama (and McCain) stand to have their votes voided post election, a situation my law suit sought desperately to pre–empt.

Now that the case – and the issues discussed therein – have been deemed legitimate by the Court having utilized the extraordinary step (see textbook image below) of distributing for conference a previously denied stay application, Mr. Bickell’s motivations should be thoroughly investigated by the Supreme Court and also by a U.S. Attorney.

Furthermore, Mr. Bickell should be fired and “we the people” need to see that it happens fast before he has the chance to pull the same cheap bluffs on other pending emergency stay applications headed swiftly to the Supreme Court this week. You can expect a very important update on this issue within the next 24 hours. 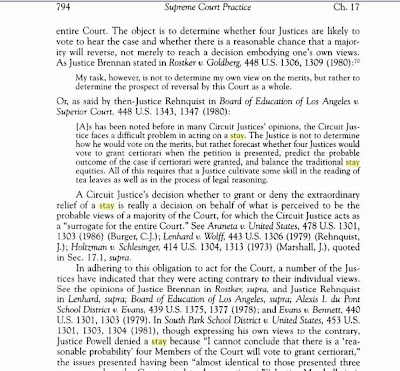