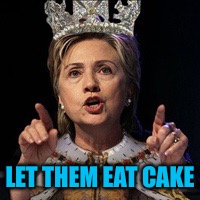 Why does first lady and newly crowned U.S. Sen. Hillary Clinton continue to accept donations to defray her legal expenses from New Yorkers of clearly modest means, when she just inked an $8 million book deal and owns multimillion-dollar mansions in New York and Washington, D.C.?

That’s what New York Daily News columnist Michael Daly wants to know, after reviewing some of the records from Clinton’s legal expense trust.

Though high-living Hillary has just spent a grand total of $4.6 million on luxurious digs for herself and her wandering hubby, records show they’ve convinced 10,071 Empire staters to fork over their hard-earned cash, lest staggering legal bills have the Clintons seeking refuge in the poorhouse.

John Marmarinos, a homebound World War II veteran, forked over $20 to help Hillary handle her legal bills. When Daly tried to locate Marmarinos to find out if the old vet knew he was, in reality, bankrolling the first lady’s lifestyle-of-the-rich-and-famous, Daly was told that Marmarinos is now in a nursing home.

Others of modest means from whom the Clintons have taken charity: a disabled retiree ($50), another man who described himself as “disabled/unemployed” ($25), a woman who listed her occupation as “homemaker-unemployed”($5), two other unemployed gents who pooled their resources ($20) and a “widowed-senior citizen” ($10).

The one thing they all have in common is they come from the lower rungs of the economic ladder.

Daly pinpoints the supreme irony of the Clintons putting the squeeze on so many of these poor folks:

“In all, some 70,000 people throughout the country have contributed $8 million toward the [Clintons’ legal] fund. That happens to be exactly what Hillary got as an advance for a book whose main commercial appeal will be the same scandals that gave rise to the legal bills.”