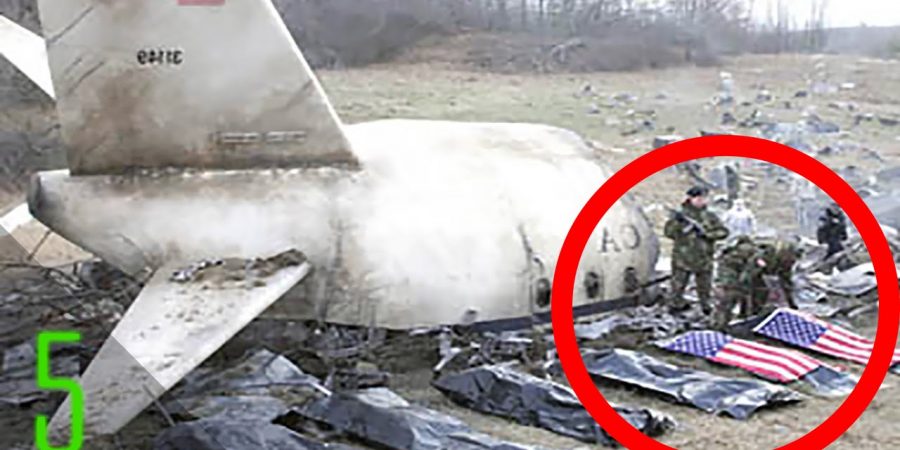 “WASHINGTON, D.C. – As Attorney General Janet Reno decides whether to call for an independent counsel for fund-raising matters, questions about the death of one of the central figures in the scandal continue.

On April 3, 1996, an Air Force Boeing 737 carrying Commerce Secretary Ron Brown and 34 others on a trade mission crashed into a mountainside near Croatia’s Dubrovnik airport. The Air Force quickly determined the tragic event to be an accident.

Brown, who rose from a childhood in Harlem to become the first black to head a major U.S. political party and the highest-ranking black in the Clinton Administration, was eulogized as an American hero during elaborate memorial services. Little noted during this grieving period was that Brown was the major target of an independent counsel probe headed by Daniel Pearson.

Pearson’s inquiry had been triggered by allegations that shortly before joining the Clinton administration, Brown received a bribe from a Vietnamese businessman. Also raised in Congress were allegations that Brown’s intimate friend and business partner, Nolanda Hill, had passed money to Brown in several sham financial transactions just before he took the Commerce post.

Pearson’s inquiry soon widened beyond these allegations into matters directly affecting the Clinton administration. On March 19, 1996, just weeks before Ron Brown would lose his life, Pearson obtained wide-ranging subpoenas calling for records of the Asian Pacific Advisory Council, or APAC, a fund-raising organization affiliated with the Democratic National Committee. More than 20 individuals and entities would receive subpoenas, including Brown and his son Michael; Gene and Nora Lum and their business, D ynamic Energy; the DNC; and several APAC fund-raisers who were brought to the Commerce Department by Brown.

At about the same time, a conservative legal group, Judicial Watch, was investigating the possibly illegal ties of Brown and his Commerce Department to DNC fund-raising efforts. Using a Freedom of Information Act lawsuit, Judicial Watch focused on Commerce’s overseas trade missions and whether participants were selected because they had been major donors to the DNC. Judicial Watch had already identified John Huang, a Commerce official and former DNC fund-raiser, as a target of its suit.

Huang had also been APAC’s major fund-raiser and was president of the Lippo Group USA, the American arm of the now-famous Indonesian firm headed by Mochtar Riady. Lippo has had longstanding ties to Bill Clinton and alleged links to the fund-raising scandal and the Chinese government. As part of its suit, Judicial Watch had taken a deposition from Huang and was preparing to take a deposition from Brown.

Another curious figure was Melinda Yee of APAC, who became Brown’s personal assistant at Commerce. Months later, after the 1996 election had passed, new scrutiny by Congress and the media would place some of these individuals – including Huang, Yee and the Lums – and groups like APAC at the center of a massive, perhaps illicit, fund-raising effort by the Clinton-Gore campaign.

But as of April 3, 1996, these matters had received little public or press attention, and Brown’s death appeared to make them irrelevant. Six hours after the official confirmation of Brown’s demise, Pearson quietly announced he was closing his probe of Brown.

According to Nolanda Hill, originally Brown was not scheduled to head up the trade mission to the Balkans that ended in his death. She says at the last minute – after Pearson’s subpoenas were issued – the White House asked Brown to join the delegation.

Given the later questions about DNC fund raising, his own involvement in that effort, and the timing of his death as the Pearson inquiry was getting into gear, it may have been inevitable that questions would be raised about the plane crash itself.

Hill herself has alleged, with no real basis other than suspicion, that Brown’s plane crash was no accident. Her suspicion may also have something to do with the fact that Brown’s death left her holding the bag. Pearson’s investigation of her was turned over to the Justice Department, where that inquiry continues today. Hill has also alleged that when she was first informed of Brown’s death, an Army undersecretary told her Brown’s plane had crashed in the Adriatic and Navy divers were already on the scene .

Confusion often reigns when disaster strikes, and later becomes the fodder of conspiracy mills. But legitimate questions about the crash remain outstanding. According to the official Air Force report on the Brown crash – which totals more than 17,000 pages bound in 22 volumes – the government identified three causes.

First, a paperwork foul-up had not alerted Air Force personnel that the Dubrovnik airport and its approaches had never been certified as safe by the Air Force. Second, the approach to Runway 12, the one assigned to the Brown plane for landing, had not been designed properly by the Croatians. And third, according to the Air Force, gross pilot error contributed to the crash. The plane’s pilots flew on a heading some 10 degrees to the left of their proper course, driving the jet directly into the side of a n earby mountain, St. John’s Hill. The Air Force report suggested the pilots likely used improper timing methods to aid navigation and were coordinating their course based on the wrong ground navigation beacon.

The pilot of the Brown plane was an “evaluator pilot” for the type of aircraft that crashed, the most senior pilot flying that type of plane in the squadron. He had accumulated nearly 3,000 flight hours, and his co-pilot had even more time flying the same plane. Despite the voluminous Air Force report, critics of the investigation have suggested that the inquiry was compromised from the beginning because investigators began with the assumption the crash was simply an accident.

On the day of the crash, and though American rescuers and investigators were hours if not days from the scene, spokesmen at the White House and Pentagon ruled out hostile fire – though the region had been the center of a military conflict of long duration. Almost all initial press reports referred to terrible weather the Brown plane encountered, implying that might have been a cause.

One day after the crash, with no real investigation under way, Secretary of Defense William Perry told the AP that the Brown crash was “a classic sort of accident that good instrumentation should be able to prevent.” These initial statements from politicians carried over to the first phase of the Air Force inquiry, which is supposed to treat every military plane crash as suspicious until the investigation is completed.

Air Force procedure calls for a two-step investigation. The first inquiry is called a safety board, which convenes to determine if the plane crashed as a result of accident, hostile fire, sabotage, mechanical failure or some other cause. The safety board is nonpunitive and secret. It exists not to assign guilt or suggest punishment, but to gather all the relevant details, evidence and testimony from those involved in the crash – to determine why the plane crashed. Information gathered in this phase can’t be used in court, which encourages personnel to come forward to admit mistakes.

The second step, according to Air Force regulations, is the convening of an accident/legal investigation, which does assign guilt and exists largely to find out what happened during the crash and its aftermath for legal proceedings. Because of its limited scope, this part of the inquiry can be more stunted in finding the true causes of a specific crash. In Brown’s case, the Air Force decided to suspend normal procedures and skipped the use of the primary safety board investigation. The second part of the inquiry, the accident/legal investigation, began immediately after the crash.

According to the Air Force, the only other instance in recent memory when the safety board was skipped followed the crash of two Army Blackhawk helicopters in Iraq in the wake of the Gulf War. In essence, the Air Force assumed the crash was an accident from the beginning.

Air Force spokesman Maj. Ed Worley said the safety board was skipped because of its secret nature and because the Air Force wanted to make “full public disclosure as soon as possible” to the public and Congress. “This was an odd case,” Worley explained. “We were flying the secretary of commerce, and a decision was made early on that for the public interest we would conduct an accident, not a safety board. That was our overriding concern and we were not overlooking something.”

A number of other unusual facts and anomalies regarding the crash have emerged since issuance of the Air Force’s report:

The weather. Initial press reports stated the Brown plane attempted to land in extremely poor weather, including heavy rains, winds and lightning. Newsweek magazine reported that it was “the worst storm in 10 years.” Time magazine reported “the worst storm in a decade was raging.” Even Hillary Clinton wrote in her weekly column that the plane crashed “in a violent rainstorm.” Yet the Air Force investigation report concluded “the weather was not a substantially contributing factor to this mishap.” Wh y was the Air Force so sure? Simple. There was no major storm.

According to the report, the weather conditions broadcast by the control tower were basically good: winds were at 14 mph, with only a light to moderate rain. Less than 50 minutes before the Brown plane crashed, an executive jet carrying U.S. Ambassador Peter Galbraith and the premier of Croatia landed at the same airport. The pilot of that plane later said, “I was sure they would land.”

The only possible hindrance to landing was scattered cloud cover at 500 feet and solid cloud cover at 2,000 feet. Since Dubrovnik airport sits between the Adriatic on one side and a mountain range on another, clouds frequently blanket the mountainside, making an instrument approach a necessity.

Navigation aids. Brown’s plane was probably relying on Croatian ground beacons for navigation. In the minutes before Brown’s plane crashed, five other planes landed at Dubrovnik without difficulty, and none experienced problems with the beacons. But additional questions about the beacons and the crash will remain unanswered because, as the Air Force acknowledges, airport maintenance chief Niko Junic died by gunshot just three days after the crash and before he could be interviewed by investigators. Within a day of his death, officials determined the death was a suicide. The New York Times reported the 46-year-old Junic was “despondent over a failed romance.”

A related curious matter was the Air Force report’s revelation that a backup portable navigation beacon, formerly stored at the airport, had been stolen before the crash and has never been recovered. Conspiracy buffs have suggested Brown’s plane may have been a victim of “spoofing” – aviation slang for what happens when a spurious navigation beacon is used to trick a pilot to change course.

The survivor. Air Force Tech. Sgt. Shelley Kelly, a stewardess, survived the crash for some four hours. Kelly and another stewardess had been seated in a jumpseat at the very rear of the 737. That area was found basically intact after the crash. According to the Air Force, she received first aid from Croatian rescuers but died on the way to a nearby hospital. Her autopsy report states that Kelly died of a broken neck.” 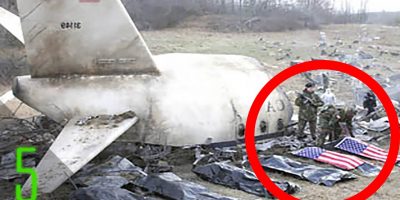